James (not his real name) is a law enforcement officer. He must be fit and mobile both for his own safety and the security of others. At the age of 18, he tore his left anterior cruciate ligament and medial meniscus. He underwent arthroscopic medial meniscectomy but elected not to have his ACL reconstructed. He did well initially, but as years went by began to have progressive and constant medial knee pain as well as instability. This pain interfered with work, recreation and activities of daily living. He came to our clinic in the at the age of 35. At that time the KT 1000 arthrometer (which is the most accurate test for ACL tear) showed his unaffected right knee to have a normal reading of 4mm while the unstable left knee had a grossly abnormal reading of 13mm: showing severe instability. His standing knee radiographs showed him to have a 50% decrease in the left medial joint space compared to his normal right: indicating moderate arthritis from loss of the cartilage joint cushioning. His lateral compartment was pristine on radiographs. An MRI was obtained which showed the ACL to be absent, the medial meniscus to be absent, and no significant damage to his lateral compartment. Mechanical axis views showed a varus (mild bowlegged) deformity of 6 degrees.

We had a long discussion as to the risks and benefits of various forms of treatment. At the young age of 35 he was anxious to do what he could to preserve or restore his deteriorating knee function. Knee replacement was not a good option for several reasons. First, it would also preclude vigorous physical activity and relegate him to sedentary work for the rest of his life. Second, because he was young it would eventually loosen and need re-replacement. and revision knee replacement is a high complication procedure with a shorter life span than primary replacement. Also, once a knee replacement is performed, whether total or unicompartmental, the option of biological restoration is forever lost. I explained that with the severe damage to his knee I could not guarantee the results but felt that biological restoration had a significant chance of substantially improving his knee, and hopefully arresting the progressing degeneration. If it were unsuccessful, no bridges would be burned, and knee replacement would still be available to him.

1) HTO: The most important procedure would be High Tibial Osteotomy (HTO) with simultaneous arthroscopic microfracture if full thickness articular cartilage defects were seen. His varus deformity ensured that his disease would progress because the pressure in his medial compartment prevents new cartilage from growing. HTO, by drastically decreasing the compressive stresses on his arthritic medial compartment, would be expected to reduce his pain, in conjunction with the MF, by allowing new cartilage to grow.

2) ACLR: If, after the HTO, he did well, consideration could be given to ACL reconstruction. I did not wish to perform them simultaneously because of the increased possibility of post-operative stiffness.

3)MAT: If he had HTO and ACLR and were improved but still had residual symptoms then consideration could be given to the final restorative procedure, which would be medial meniscal allograft implantation (MAT). This staged approach allowed the best chance for him to avoid complications and could be stopped if he were not improved at each step along the way.

It was possible that his already arthritic knee might become more arthritic after each procedure obviating the need for further restorative surgery. However, while our plan involved potentially three separate procedures, all would be outpatient or short hospital procedures and would allow immediate weight bearing thus allowing him to miss minimal time from work: although he would need to work in an office setting and not in the field.

James decided to proceed with the first stage of the procedure: HTO/MF.
He underwent successful HTO with an Orthofix external fixator and MF. In the first two postoperative weeks his deformity was gradually and painlessly corrected. He showed gradual post-operative improvement. Eight months after surgery, he felt he was about 60% improved compared to before the surgery. He was, however, troubled by continuing feelings of instability, for example mowing the lawn. His pain had continued to diminish so that by nine months after surgery, he was more active than he had been before the surgery. This increased activity however only served to make his knee instability more bothersome to him and was now his chief limiting factor.

The patient therefore decided to proceed with Anterior Cruciate Ligament Reconstruction (ACLR). Ten months after his first surgery, he underwent successful quadruple hamstring ACLR. At that time his microfracture was viewed arthroscopically and showed successful restoration of a fibrocartilage layer in the areas where he formerly had had exposed bone. 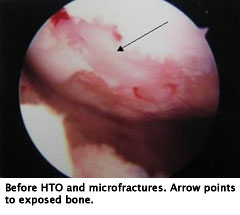 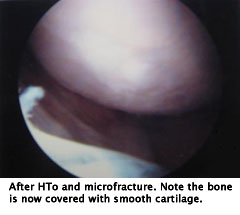 Radiographs showed his medial joint space to have increased in size as a result of the HTO/MF indicating growth of new cartilage. His instability had stopped since the ACLR. His pain was also much less than before the surgeries and 5 months after his ACLR surgery, he commented to me “I should have had the surgery done years ago”. However, he still did have some pain. This was of concern to him because of the physical nature of his profession and also because it indicated possible continued advancement of his arthritis. He therefore decided to take the final step and proceed with MAT. The other procedures had clearly not aggravated his arthritis and had indeed resulted in definite functional and radiographic improvement. We elected to proceed six months after his ACLR. The elapsed time would allow his graft to have matured sufficiently that whatever stresses were applied at the time of MAT should not damage it.

His knee was measured and a size appropriate donor was found. At six months after his ACLR, he underwent MAT. He initially had some aching and swelling. These persisted for several months and then gradually went away.

Six months after his MAT surgery, he was seen for his one year KT 1000 stability exam for his ACLR.
Whereas his injured knee had had 14mm of laxity before the ACLR, versus 4mm for his normal knee: he now had identical 4mm laxity readings for both knees. He walked well with no limp and had returned to his regular job activities. His only limitations were that he was excused from the required annual mile run test, and he did not participate when arrests were made. While continuing to be much better than before the surgery he had some stiffness with prolonged sitting. He was able to exercise painlessly on a stationery bike but had pain with an elliptical.

The patient came in for his scheduled two-year follow-up for his ACLR a year later. He was 2.5 years after his HTO and 1.5 years after his MAT. His knee had continued to improve over the course of the year to the point where he had actually just completed his one mile run. He noted no pain during the run nor the day after the run. He mentioned that he was able to pull his daughter around on a sled, which he had been unable to do before, and even gave her a piggyback ride which he also had not been able to do previously. He continued to have no feelings of instability. He said that he did feel some soreness when running on uneven ground, but that this was the only time he felt any soreness.

After his 2 year visit no further follow-ups were scheduled. If he has any problems we have asked him to call. Only time will tell how he, and other patients like him, will do over the long run. HTO by itself has been associated with 80% ten-year success rates in the older literature. With his knee alignment and instability corrected and a new layer of cartilage covering previously exposed bone we are hopeful that even longer term success may be possible. His current level of function would have been impossible with knee replacement, his only other prior viable option. And he does not face the dangers of revision surgery that he would have if an artificial knee were implanted. Even if his biological restoration were to fail in the future, current tissue engineering work may allow him the option of more sophisticated biological restoration then that is not present today. He was able to continue working throughout his period of knee restoration. As with all patients, I have urged him to not perform any activities that cause him pain and to not take any pain killing medicines such as acetaminophen, ibuprofen or Naproxen which interfere with your ability to know when you are experiencing pain. The body does an excellent job of maintaining itself and of telling you when you are destroying tissue by giving you pain signals. This can be a delicate equilibrium. As long as you stay within this envelope of function there is reason to think that deterioration will not occur beyond what normally occurs with long-term aging. However persisting through even mild pain will likely result in increasingly rapid joint destruction. Fortunately James is now able to function virtually without restriction and these precautions should help him to keep him, and all of us, at our maximum level of function.

Biological joint restoration has had a high success rate in our clinic – but only in carefully selected patients. For example, with the exception of microfracture, these procedures are generally not suitable for persons over 59 years of age, persons more than 30% above their maximum ideal body mass, and people who smoke (although many smokers have had successful results after giving up smoking). For patients over 60 or 65 years of age joint replacement is usually a better option. However for suitable patients, like James, joint restoration offers many potential benefits as described above. The procedures are all FDA approved and paid for by all major insurance companies. In coming years advances in technology will continue to increase their applicability to more and more people who need them. Even now it is safe to say that virtually all patients under 60 with knee disability can be helped sufficiently such that total knee replacement should virtually never be necessary.