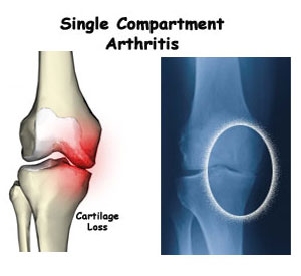 Description of the knee’s three compartments:

Age as a parameter:

Patients of any age can benefit. Older patients benefit from the reduced severity of the procedure and easier recovery. Younger patients benefit because when the prosthesis eventually fails (all prostheses fail faster in younger patients), they will be able to have it replaced with the better primary TKA as opposed to the less desirable RTKA.

Risks of the procedure:

Infection occurs about 1% of the time and would require further surgery. Fracture of the knee bones at the time of surgery or later has occurred rarely. Blood clots can occur but are very rare. Some patients will have inadequate pain relief and require revision to primary TKA. Others will have relief but still have significant residual discomfort. Stiffness can occur and require further surgery and may not resolve completely. RSD (chronic pain syndrome) can also occur. This list is not exhaustive. 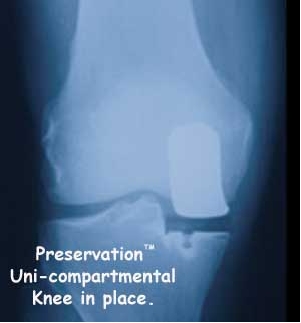