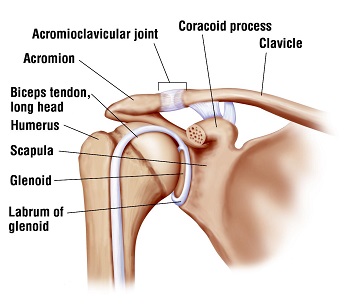 Anatomy: The labrum is a circumferential cushion within the shoulder (glenohumeral) joint. It is made of fibrocartilage as first reported in a research paper of mine published decades ago.

Injury: Injury to the top of the labrum is called a SLAP (superior labrum anterior and posterior) lesion. It is usually caused by the arm being pushed, pulled, or twisted. Type two or four tears usually require surgery and are characterized by detachment of the labrum from the biceps tubercle. An adjacent cyst may form due to joint fluid that leaks out of the shoulder through the tear. Tearing near the bottom of the labrum is entirely different. It is associated with shoulder dislocation. It does not usually cause pain and does not generally need to be treated unless the patient has problems with recurrent dislocations.

Diagnosis: Pain is usually in the back of the shoulder. Conventional MRI is not accurate for diagnosis but rather an MRI arthrogram where dye is injected prior to the arthrogram is required. Even then the MRI has a significant error rate.

NON-Surgical: Some patients have a SLAP lesion that does not cause pain. Rather they will have pain in the front that is caused by rotator cuff tendinitis. Surgery is not necessary for them. We use a lidocaine injection to numb the rotator cuff to differentiate the source of the problem. These patients improve with physical therapy and PRP (platelet rich plasma) injection.

Surgical: When Surgery is necessary I have a high rate of success with arthroscopic repair. Some surgeons prefer to leave the labrum unrepaired and cut the biceps tendon instead. I do not favor this approach and prefer to leave the biceps intact. I have been asked to edit a journal edition dealing with SLAP repair for publication.

Unlike many shoulder specialists I prefer not to use nerve blocks for surgery – for several reasons.

I wish to add that the use of nerve blocks for those surgeons who choose to use them is perfectly appropriate and I respect their judgement, but the above evidence based discussion explains why I believe it is in my patient’s best interest not to use them in general. I would add that in special circumstances, such as medication allergies, I will use them. And I will also use them if the patient wishes me to, although in my experience most patients are relieved at not having to have one. My goal is to have an informed evidenced based discussion with the patient so that we can make the best decision for that individual together.