This 24 year-old man had torn his left ACL as a teenager and had it surgically reconstructed. The graft used for the surgery was an allograft. Also during the surgery, a medial meniscectomy and a lateral meniscal repair were performed. After recovering from this initial surgery, the knee functioned fine, until the patient slipped and fell, damaging the knee again.

When he was seen in our office, he complained of pain and had moderate swelling in the knee. KT1000 testing showed mild laxity in the damaged knee suggesting a partial re-tearing of the ACL. Conservative treatment of physical therapy was tried, but the symptoms of pain continued to worsen. An MRI showed cartilage damage and a possible tear in the medial meniscus.

Surgery was performed with plans to access the damage to the ACL graft and deal with the cartilage and meniscal damage.

See the pictures and video at the bottom of the page to see the images of the damaged ACL graft and cartilage.

Because of the microfracture, the patient was partial weight-bearing for the first 6 weeks after surgery. After that he began physical therapy which continued for 4 months. During this time his knee continued to improve. By 1 year after the surgery, the patient had full range of motion in the leg and was pain free. He continued to have a mildly more lax left knee due to the partial tear of the ACL graft, but this did not affect his ability function.

About 20 months after the surgery, the patient returned to the office. After running on the knee, he developed pain and swelling again in the knee. The MRI did not show any problems. Suspecting either another meniscal problem or a failure of the microfracture, surgery was scheduled.

The surgery also offered an opportunity to take a second look at both the ACL graft and the site of the microfracture. The ACL graft showed a good healing response to the stimulation applied during the previous surgery. The graft was covered with healthy tissue and was integrating with the surrounding tissue. The graft also appeared thicker than it had previously. The microfracture site showed healthy tissue covering the entire area. The tissue was probed and found to be healthy and well-attached.

The pictures and video below show the before and after images of the ACL graft and the microfracture.

Although this patient is still recovering from his most recent surgery, he is doing well and is expected to recover and be pain free again. He will continue to have mild instability because of the partially torn ACL, but should be able to function well. 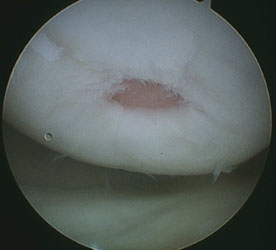 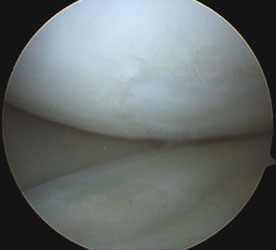 The left image shows the damaged cartilage. The red area is exposed bone. Fissures of damaged cartilage radiate from this area. The right area shows the same area 22 months later. The area that was originally damaged is completely filled with fibrocartilage and the fissures and other damage around the site have also filled with tissue.