This postal worker had a meniscectomy performed after tearing his meniscus. Seven years after this surgery, he suffered a work injury that resulted in disabling pain that did not allow him to work. He was able to walk only with a cane and severe pain. It was recommended that he have a total knee replacement done. Since he wished to remain physically active both on his job and cycling, he did not want to do a replacement.

When this patient was seen by our office, he was found to have bone on bone changes in his lateral compartment and a 9 degree mechanical axis valgus (knock-kneed). He elected to have a distal femoral osteotomy along with microfracture.

Seven months after the surgery, he was completely pain free. He was taking no medication and he had full range of motion of the knee. He returned to light duty work at the post office. At ten months, he felt so good that he began to walk a partial delivery route. By one year, he was walking his full postal route without pain or problems. His X-rays (see below) showed cartilage restoration. 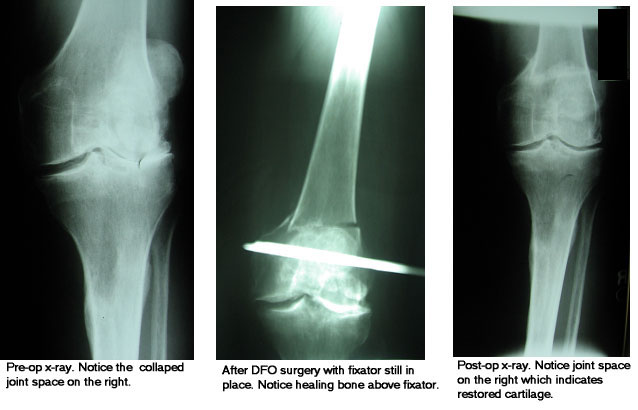