First some background. Ibuprofen (Advil, Motrin) is a Non-steroidal anti-inflammatory drug. The side effects of these drugs have been estimated to cause over 16,000 DEATHS every year in the United States in a New England Journal of Medicine Study (the world’s leading medical journal). They cause bleeding ulcers that are sometimes fatal, kidney problems, liver problems, reduced sperm count and a litany of other problems. If they are taken patients should be monitored with stool specimens to look for GI bleeding as well as regular doctor visits. So any increased use of ibuprofen will result in more medical complications including more deaths from their use. Thus it is very important that any encouragement to take these drugs not be stated unless there is strong evidence that there are definite benefits to offset the definite complications that will occur from increased ibuprofen use.

The aforementioned study actually is really about a laboratory test, developed by a company that is connected with the principal author, that measures a protein in saliva that the authors say is correlated with the development of Alzheimer’s disease. The study is not really about ibuprofen and Alzheimer’s, and no data is presented to show that ibuprofen is beneficial for Alzheimer’s. An excellent article from the UK entitled “Claims ibuprofen will wipe out alzheimers are misleading” states

" ‘Painkiller ibuprofen could 'wipe out dementia', is the deceptive headline from the Sun…The study that prompted such an optimistic headline was in fact a small piece of research that looked at a saliva test that measures the amount of a protein called amyloid beta protein 42 (Abeta 42)…this study didn't test the ability of ibuprofen for preventing or slowing down the progression of Alzheimer's disease… Based on the limited results presented in this study, there's currently no evidence that taking ibuprofen or other NSAIDs can prevent Alzheimer's disease.”

The authors promote their saliva test as the method to determine if ibuprofen should be taken. If patients believed that ibuprofen actually did help Alzheimer’s – as the authors state without evidence -patients would have a strong incentive to buy this saliva test and its makers would profit. Until evidence from treatment studies is found, there is great danger in writing articles to suggest that more people should take a toxic drug. This is especially true since many readers will no doubt decide to take ibuprofen even without taking the saliva test. 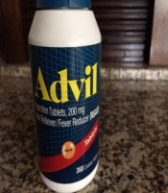